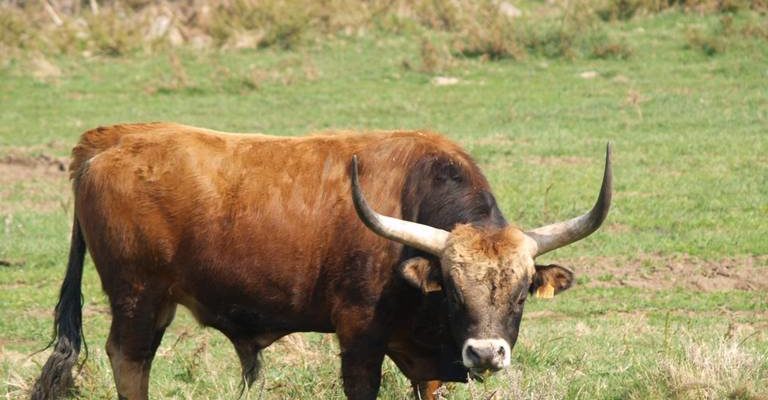 The cachena cow is a bovine race, typical of Portugal and Spain. This race, in the antiquity, was of triple advantage: work, meat and milk, with predominance of first for the agricultural works (oxen). Today it is used as a producer of excellent quality meat. Of the autochthonous cattle races that exist in Galicia, in danger of extinction, the cachena race is the one that better progresses.

The name of the race derives from the etymology, given that cacheno means “piece of a thing” in Galician, indicating its small morphological format.

Originally from southwest Ourense, in the mountains of the Sierra de Xurés, Leboreiro and Montes del Quinxo, where it was located in the parish of A Illa in the Town Hall of Entrimo, and more specifically in the town of Olelas.

Animals of reduced size – is the smallest Spanish breed -, body harmony, large size of the antlers and expressiveness on the face, with a calm look. Udres of great dairy conformation, despite its small size.

Light brown coat, hazel, darker in the neck region. Nasal mucous and black genitalia. Black hooves Scrotum in light colored males with distal dark spot (dome). Horns in high lyre of great proportions and circular section, with blades in amber and tip in black. The adult males weigh on average 550 kg and the females 350 kg with an elevation to the cross of 9-120 cm. and 100-130 cm., respectively.

Distributed throughout Galicia, being present in the four provinces, with predominance in Lugo and Ourense, where most of the breeders are located. There are also herds in the Basque Country, Extremadura and Asturias.

It is the best-known native breed and also the one with the largest number of specimens. At the end of 2018, a total of 3,250 heads had been counted among 150 farms, mainly in the provinces of Lugo and Ourense.

Its main skill is the production of a calf, weaned between six and 9 months of age, with very low production costs, which has good meat quality characteristics. Great producer of milk, with great growth speed of their young. Channels of 90-100 Kg at 9 months, with breastfeeding and low intake of cereals.

The exploitation system is 100% extensive, taking advantage of herbaceous resources of little nutritional value, with loads below 1.1 UGM / ha, with adaptation to all types of land, and altitudes. High longevity and fertility, not being rare the existence of two births in the same calendar year.

They also stand out for their rusticity, ease of delivery and for giving a meat with a good distribution and a high percentage of infiltrated fat.

2021 © Frigoríficos Bandeira
Back To Top

You can find out more about which cookies we are using or switch them off in settings.

This website uses cookies so that we can provide you with the best user experience possible. Cookie information is stored in your browser and performs functions such as recognising you when you return to our website and helping our team to understand which sections of the website you find most interesting and useful.

Strictly Necessary Cookie should be enabled at all times so that we can save your preferences for cookie settings.

If you disable this cookie, we will not be able to save your preferences. This means that every time you visit this website you will need to enable or disable cookies again.

This website uses Google Analytics to collect anonymous information such as the number of visitors to the site, and the most popular pages.